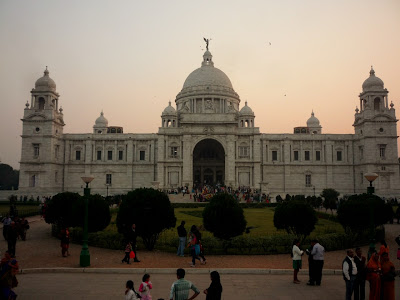 This was my second visit to Kolkata.The first one was back in my second year of Engineering when my dad took me there and from where we went on to Agartala.This time I had Abhishek and Deepanjan,Bengalis themselves to help me.
The plan to go to Kolkata was spontaneous.It emerged from the fact that we had five holidays ahead of us and our plans to go to Orissa coudn't materialise properly with a number people dropping off from it. So abhishek and me,having decided that is was a long time since we had met our friend deepanjan, decided to go to Kolkata.So within an hour ,we packed our bags and off we went.Luckily for us, a group of abhishek's friends were going to Kolkata the same night and we joined them.We took two general tickets and in the train we bought sleeper clas tickets from the TC and adjusted with abhishek's friends.A million thanks to them.We took the 8 30pm Howra Mail from Raigarh. 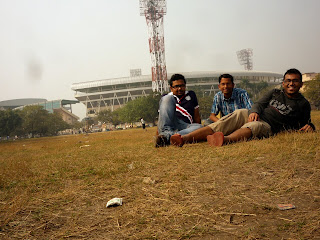 We reached kolkata the next morning at 7 30 am.We said our goodbyes to abhishek's friends and started looking for a hotel around the howrah station.We got a decent hotel nearby.We then called deepanjan and around 10 am he arrived .All that while we were strolling on the British era Howrah Bridge.Here we had a small discussion about the days plan and firstly decided to go to the Esplanade area.So accordingly we boarded a ferry across the River Hoogly to Babughat.From there we walked past the Eden gardens,the maidan and then finally reached the college street and the new market area.We had hot kati rolls here and from there we went on to the famous bakery,Kathleen.Here we had some nice pastries.We then rambled along to the british era Hogg market.Here we sat down and just took in the atmosphere.Kolkata has this strong residual british influence still left in it and it can be seen everywhere.The buildings being the strongest reminder.I spotted some buildings here which were constructed as back as in 1886.After some time here musing about Kolkata, we went inside the market.Everything from keychains to jewelery could be found here.

New market was next on the list.Here we strolled along looking at the various stuff the stall keepeers had to offer.I bought some small hand bags as souvenirs.Then in the afternoon we went to park street.As deepanjan had some work near Jadavpur University we went there by catching a metro.After his work was done we casually walked around and luckily for us there was a fish stall and eager to have some seafood I quickly orderd fish fry and prawns.Though I was dissipointed by the taste I was content with the fact that I tried something new.Evening came and we went back and decided to have some kebabs in a nearby restuarant.So we went to this 'Singhji ka Dhaba' where we had three types of kebabs and some chicken.We ate our fill and when we were done it was time to part.Deepanjan was to take the local back to home from Howrah.Once again we boarded the ferry from bapughat and had some wonderful views of the city.The howrah bridge was wonderfuly and subtly lit up and was a delight to look at.We parted ways near the Railway Station and abhishek and myself made our way back to our hotel content with the days travels.

The next day started off in real earnest.Abhishek and myself got up,had some excellent breakfast of kachori nearby and discussed our plans for the day over breakfast.After this discussion we decided to go visit Rabindranath Tagore's home which has been converted into a museum.Its called Jorashanko Takhurbari.After much asking around the sharp bylanes we found ourselves standing in front of the entrance to Ravindra Bharati University.We strolled inside looking around the small but beautiful campus.Soon we entered the actual home of  Rabindranath Tagore.He came from a rich family and that showed in the size of the house.We skipped in and out of the numerous rooms looking around.There was a whole section dedicated just to the relationship between Rabindranath and Japan.There were
pictures,manuscripts,books,clothes and other items related to him.Apart from us there was a big group of students and a couple of other visitors.There was a chinese couple also.Anyway we spent some time here,took some pics and left the museum in a couple of hours.From here we went to the famous and iconic Indian Coffee House where the likes of Rabindranath Tagore and Subhash Chandra Bose used to come.It is Kolkata's favorite hangout place or what is locally called 'adda'.We had some delicious chicken pakoras and chicken something.The ambience of the hotel was great.

Our next stop was the famous Victoria Memorial.By the time we reached there by taking trams,buses and metro( just for fun) it was evening.We spent some time in the sprawling gardens around the british marvel and took some great pics.It was dark soon and we made our way to new market next.Everything was beautifully decorated here,with Christmas round the corner.At a roadside stall we had some delicious momos and kebabs.Soon it was dinner time and we went to the famous Prince hotel.We had two types of fish here,Pabda Mach and bowal mach.From here we called it a day and went back to our hotel and the next day we started back for Raigarh. 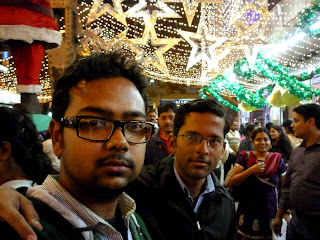 Highlights of the trip
1- Muffins at Kathleen Bakery.
2- Rasgollos at KC Das.
3- Fish Dishes at Hotel Prince.
4- Rides in Tram,Metro,Ferry and Bus.
5- Snacks in Indian Coffee House.
6- Momos at a roadside stall in New Market.
7- A Walk on the Iconic Howrah Bridge.
8- Rabindra Nath Tagore's House.
9- Walks in and around Hogg Market,New Market and College Street.
10-Chicken and Egg Rol from Hot Kati Rolls. 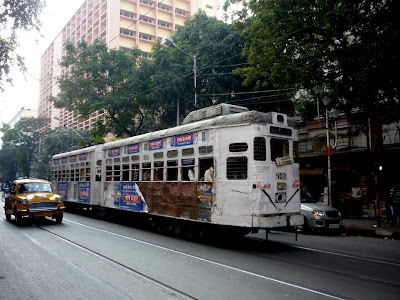 Posted by Razzaq Siddiqui at 4:31 AM