Last Tuesday we visited the Singhanpur caves and Ram Jharna picnic spot.Let me tell you upfront Singhanpur caves is not for the casual tourist.You need determination and interest to see it.I had done my research on it before I came to Raigarh and imagined it to be something like the Borra caves near Vishakapatnam (the only other caves I ever visited) But this far from it.The approach to singhanpur caves is quite difficult.On the internet there are only three lines about this caves.
''Singhanpur is most popular for its ancient caves..
Singhanpur is situated 20 kms. away from Raigarh and has the distinction of hosting the oldest scupltures on earth. These sculptures are claimed to have been created in 30000 B.C. and look very similar to Mexican and Spanish sculptures''
What nobody mentions is the difficulty in reaching these caves.Let me give an account of the trip we made.
It was on Tuesday that we made the decision to go.My friends Abhishek,Satya,Ravi Teja,Mangesh,Sanket,Ashwin and myself completed the group. 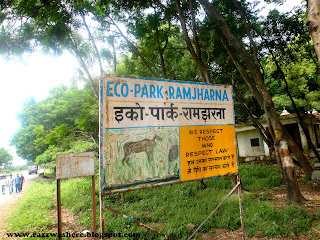 Since we had no information on how to reach the place we had a little chat with a pan wala and he told us that it was better to hire an auto.So we hired an auto rickshaw for the whole trip.It cost us Rs 500, to and fro the hostel including the waiting charges.It is about 20km from our hostel, so around 23 km from Raigarh  on the Raigarh-Bilaspur highway.The Ram Jharna Picnic spot is on the right side.We got down here and went inside.The ticket cost is Rs5. It is an Eco park and we need to walk for about 1km inside.Mid way there is a Swimming 'tank'.Most of the time it is occupied by 'parivars'(families). So we weren't allowed to go inside. We skipped this part and proceeded ahead to reach the actual Jharna which isn't natural at all.There is a pipe bringing in the water from the mountain tops and a cement block has been constructed from where the water drops off creating a small stream of water fall.Here some boys were bathing complete with soap lather all over them.The place here was crowded with people and the smell of soap was in the air. Polythene bags and cups were strewn around making the place look somewhat dirty.Unless you are spiritually inclined it is better to skip this part.
The only good thing that came out from the Ram Jharna part is that we found a local villager who agreed to take us to the caves.Yes,that right you need a guide to take you there.He warned us to be careful near the caves stressing that the honey bees,which are present in large numbers, get agitated easily and recalled an incident in the past when a youth disregarded his warning and that eventually led to this death.Anyway we took him with us and moved ahead.It was 2km more towards the champa side on the Raigarh-Bilaspur highway and then we reached a curve.(Upto this point a 4 wheeler can come but from here one has to walk) Here a small trail went in to the jungle and to the mountain above.We took this path with the guide at the lead. After a short leisurely walk on a green carpet of grass the actual rocky climb started. 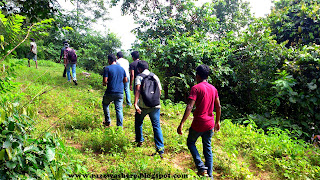 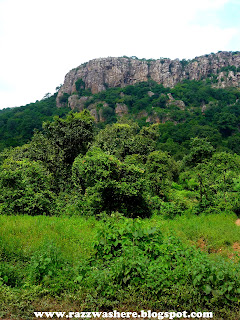 We climbed up holding onto rocks and bushes and overhanging branches.We crawled on all fours ,we stretched and jumped and hopped around and kept moving.The path offered some nice views of the Monnet Steel Plant below.The path juts along the side of the mountain offering some awesome views.It has a zig zag nature to it, leading me to think that there was a stone path here long ago.We skipped that part and climbed on a straight line as suggested by the guide.The sun was shining overhead and by the time we reached the top we were drenched with sweat.Slowly, as we emerged from the trees the sight of the imposing mountain top met us.The rocky mountain side with huge rocks jutting out presented an awe inspiring sight.

The first cave was nothing much to talk about.There were two small caves of about 2 feet diameter. After some distance nothing was visible with darkness engulfing the rest.We moved on to the next cave.

This was bigger with a diameter of about 1.5m. A person could go in on his all fours.The place reeked of bat shit and we turned back in disgust after taking a look inside.The third cave was much better and here I had the most fun.This cave's opening was much bigger and a person could easily enter inside.The guide who was with us bade us to enter it with our mobiles flash light. I turned on mine but it didn't illuminate anything. I then took sanket's xperia and turned on its flash light and slowly went inside. I was the only one who was willing to go inside first.There was another group of people already there and some among them,seeing me going inside followed me. Satya also, soon joined in. I slowly and carefully swept the mobile all around the cave looking at the walls.The guide kept telling me that this particular cave has three sections more(thats why the better circulation of air) and told me to find them. I found the first to my right.
This was very small and I could hear the screeching of bats inside.Also the whole floor was now lined with bat shit and I was standing on it barefoot(eeeew!) because the guide told me that it had religious values and ordered me to remove my shoes.Straight ahead lay the second section.
This was a bit bigger and the guide encouraged me to go ahead. I declined saying there were bats ahead.He ignored that and chided me, asking me if I was afraid to go any further.This annoyed me and I moved ahead further and stopped just at the entrance of the second section.I was at the deepest section where one could go standing upright and without disturbing the bats.The sound of the bats was now very sharp and shrill and I knew going ahead any further would be foolish.(I thought to myself that if I ever want to become batman this would be the best way to overcome the fear of bats) From where I stood,I could see the third section of cave starting from my left.The floor of this cave was covered with water and bat shit mixed. I was the only person here at this point and I felt like in some kind of an adventure movie ,shining my mobile into the dark, looking for something.It felt great! and I was satisfied that all the hard work of climbing up was worthwhile.We spent some time here and since the auto wala, whom we hired was getting angry since we exceeded the time we agreed upon,We started back on our return journey.The climb down was a bit tricky as any slip would result in rolling down the slope.Eventually we reached down and made our way back to the auto. I looked back at the mountain and smiled in satisfaction that my travelling journey in Chhattisgarh has well and truly started.
While returning to the hostel we made a stop at JSPL Hotel Amantran and had a good and hearty lunch. 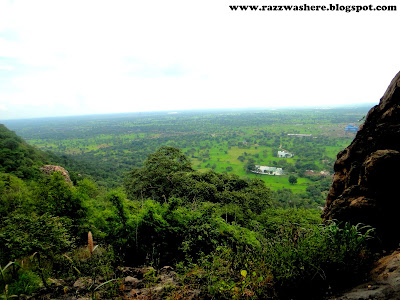 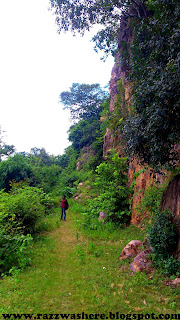 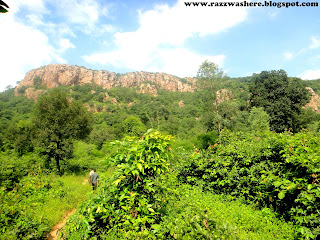