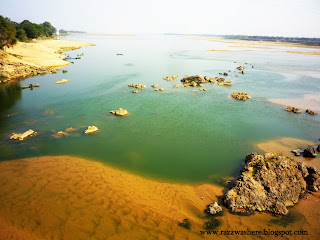 As I laid down on my back on the sun baked sands of the River Mahanadi,there was stillness all around,the sky was crystal clear with not a speck of cloud visible anywhere,and the only sound I could hear was the low murmur made by the water.The stillness was ocassionally broken by the squeal of a bird or the sound of children playing at the river bank in the distance.I covered up my legs with the sand for that warm,intoxicating feeling that comes with sand exposed to sunlight.I looked up at the sky,at the vast blue clear expanse and with the stillness in the background,I felt like I was in a different world,detached from the world, I felt at peace.
That was my best experience of the trip me and my friends made to the River Mahanadi last Sunday. 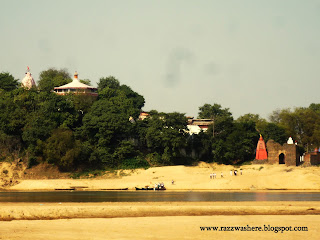 The plan developed when me and satya were having a casual talk about going somewhere near for timepass the day before.I suggested Mahanadi and because of a lack of interest from abhishek and raviteja we decided only me and satya will go.The next morning my room-mate sanket asked me to find out if other people were interested to come so that he could arrange a car if enough people were ready to come.
I went out to the mess where people were having breakfast and told one of them about the plan.Slowly the news spread and at the end 12 of us were ready to go including Sanket,Abhishek,Satya,Rajesh,Pruthvi,Amit,Sai,Shashank,Siddharta,Poornesh,Anush and myself. Sanket arranged a tavera for us.we departed at around 11am.we reached Chandrapur 45mins later. 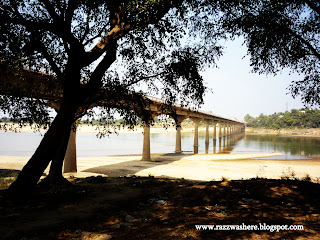 Chandrapur is a small town 30km south of Raigarh with the famous temple,Chandrahasini being its most famous attraction,the river Mahanadi being the other.
Except Abhishek,Amit and myself everyone left for the temple.We strolled around and walked on the nearby bridge over the Mahanadi. In the middle of the river there is an island  which has another temple and the bridge continues from here to the other side.
We got down to the river bank from a ghat built near the island mentioned above.We searched around for a clean place and after finding one,we got into the water.We played around and did all the things people generally people do in water,splash it around,hold breath and go underwater etc.  The speed of the water was very high and at spots where the water reached upto our chests we had difficulty in standing properly.After some time we spotted some rocks jutting out towards the river on the other side and abhishek and myself  made our way towards it so that we could do some diving or in our terms just jumping in the water from some height.The water reached as high as our necks at the deepest point and that scared us a bit but that was only for a moment and the water level dropped immediately after.Soon we reached the area and to our surprise there was a small lagoon shaped water body there. 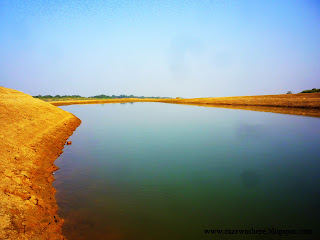 The water was green and was shining in the sunshine.It was very tempting and inviting but we resisted going in as it looked deep.We looked around,climbed on the rocks,ran on the sand and as the place was too good we decided to go back,get our camera and come back again.So we did just that and took some great pics and videos of us jumping in the river.At around 3pm the rest came back from the temple,so we went back to our place.Here the 12 of us had lots of fun.But One thing that annoyed me was that everyone was too busy in taking pics than enjoying the pure bliss of an experience in a river.This led me to jokingly remark that we need to ban cameras the next time we go on a trip.But then somebody reminded me that everyone has his/her own idea of enjoyment .
That was true of course and I kept quiet.At around 5pm we wound up and slowly ,wearily made our way back to our car.while going back we stopped at a popular dhaba named,surprise surprise,'Popular Dhaba' where we had some delicious dishes made even more delicious by our own hunger.And that ended our second trip since we came to Chhattisgarh. 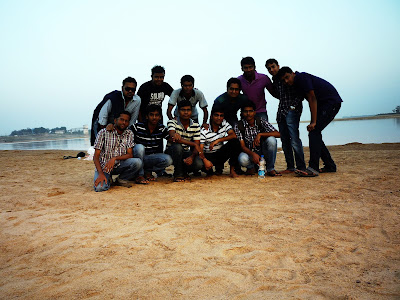 Location-Chandrapur
Distance- 30km from Raigarh
Car fare- Rs 1200 to and fro ( for a Chevrolet Tavera)
Posted by Razzaq Siddiqui at 4:06 AM