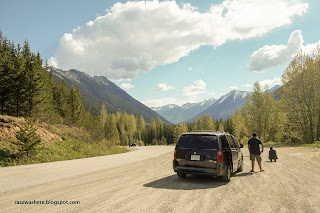 It is often said that sudden trips are the best. I am not a fan of that theory. I believe the planning part is an important step and an equally enjoyable part of the trip. But that doesn't mean we stick to the plan no matter what. I follow a simple rule - Have a plan but be prepared to throw it out of the window when something new presents itself.  Sometimes opportunities knock and you have to succumb to its temptations and embark on it without a plan. Which is what I did when Namendra, my friend and batch-mate in University presented this idea of doing a road trip to the interior of BC that weekend.  One day after class he casually said lets go on a trip. I said cool. Lets do it. I asked when. He said now. We had classes that Thursday but I thought well I can always catch up with the stuff I am going to miss but this trip, who knows when the opportunity is going to come again. So I said yes and we started our planning. Meanwhile we started looking for other people to join us. 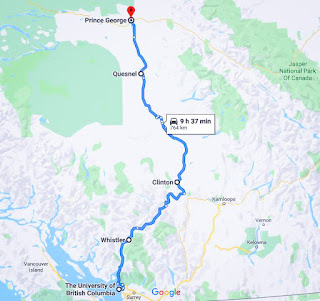 With 2 more people agreeing to come laong, we were a total of 7 persons including 2 kids. Namendra, the man with the plan, Sonali, Namendra's wife and their two cute kids, Arhaan and Bubbles, then Divya and Thivya, our classmates in University.

The Plan
Our plan was vague and we wanted to go with the flow as the trip progressed. The backbone of it was this.Go to Prince George, look around and from there,depending on our progress so far, either go to Kitimat in the west or to Dawson Creek on the east.

The Journey
We hardly slept the night before our trip. Thivya and myself had come over to Namendra's home to spend the night there so that it would be easier for us to start the next day. After watching a movie we all slept at around 1 am in the night. This was totally against my rules before a trip but I was helpless here. We woke up at around 3 30 am and by 5 am we were on the road in his Dodge Caravan. A handy vehicle, it was perfectly suited to our purpose. We picked up Divya from his home and by 6 am we were well and truly on our way for our first road trip in Canada. 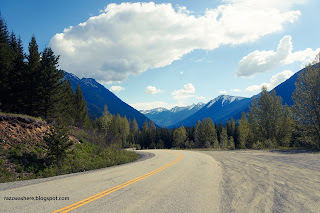 As everyone had very little sleep the night before we kept drifting in and out of sleep except Namendra of course who was on the wheels. Slowly Vancouver disappeared behind us, and we found ourselves on the Sea To Sky Highway. Through my sleepy eyes I could see that some places of interest passing by. The first point to mildly elicit our interest was Shannon falls. We passed by it as we stared at it excited but there was not enough time to take a picture and since we had a long journey ahead we did not stop.We planned to take the following route passing through Squamish, Whistler, Clinton, Quesnel and finally to Prince George.

Badly in need of some coffee we stopped at Pemberton for breakfast. I will have to admit, we missed the excellent views of the sea to sky Highway.  But that part was to be covered in a later trip so I was not worried about that. Our plan for the day was to reach Prince George by evening.

At Pemberton we stopped at a McDonalds outlet and had our breakfast there. The sun was shining warmly above and we sat outside on the chairs provided near the parking lot. The location itself was beautiful. Set against the backdrop of the snow covered mountains the McD building looked pretty. 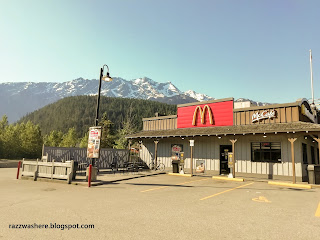 I had never stepped out of Vancouver and had never seen anything of the rest of Canada so this was the first town I was seeing outside of Vancouver. Wide eyed I looked around. With wide roads, pretty little sidewalks and the houses which looked they were transported from the Old west era, it looked idyllic. A little Wikipedia reading told me that Pemberton was an important town during the Gold Rush years of 1850s. That explains the old west vibes. All of this was mighty exciting for me. Growing up watching Hollywood movies I could match a lot of things I used to see in movies right here in front of me. 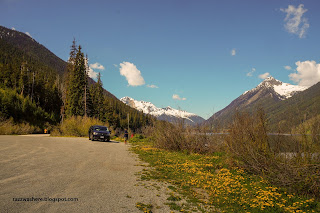 Our next stop of significance was near Duffey Lake some 45 kms beyond Pemberton. One of the things that I liked immensely was that near every scenic spot they have a small area where you can stop your vehicle and enjoy the views. Duffey lake too had one of those small areas near the highway. Here we stopped, and having got out of the car took in the excellent views on offer. The parking space was just beside the road, the edge of which was lined with pretty yellow flowers. Beyond this patch of flowers the land sloped downwards into the Lake. From where we stood, we could see the lake extending towards the left and the right disappearing into the sides of mountains far away. Directly on the opposite side were the majestic snow capped mountains.  The water was clear and looked like a sheet of mirror as the mountains above made a perfect reflection in the water below. The weather was warm and sunny, making it pleasant for us to just stroll around and take a much needed breather. 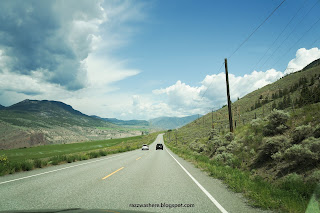 After this rejuvenating break we resumed our journey. We passed through other towns like Clinton before we stopped at 100 Mile. We passed all of those things I used to see in movies. Deserted Gas stations (Yeah, Petrol is called Gas here), huge shops like Walmarts in little towns, Vast fields with not a person in sight. Compared to the density of people we find on Indian Roads with a village every other kilometer, this lack of people seemed unnerving. Sometimes the loneliness of the roads bought to my mind all the Horror Movies I watched which were set on roads like Jeepers Creepeers (Both parts). Or maybe the coin toss scene in No Country for Old Men'. Well, pushing aside these thoughts I sent most of my time looking out the window enjoying the views. 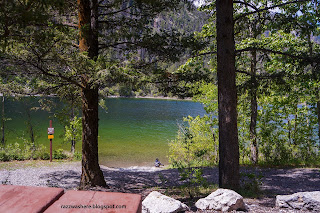 At 100 Mile we stopped at a Tim Hortons outlet and had our lunch there. After this we made a couple of stops before we reached Prince George at 7 pm in the night. In all, it took us around 14 hours to reach Prince George from Vancouver. We did not have much time to look around Prince George nor did we have the inclination to do so. We just headed to out motel which, again, reminded me of Hollywood movies. For dinner we went into the the city and by luck found an Indian restaurant from where we got some food packed and had it later in the room. Thus ended our first day and first foray into the huge expanse of Canada. 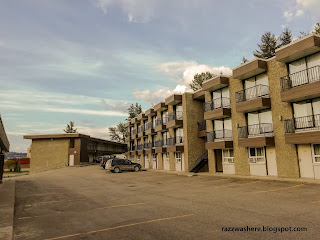 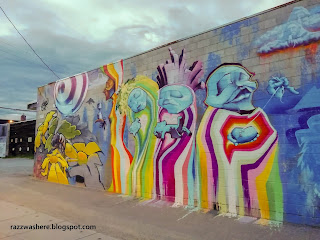 Posted by Razzaq Siddiqui at 6:48 PM No comments: