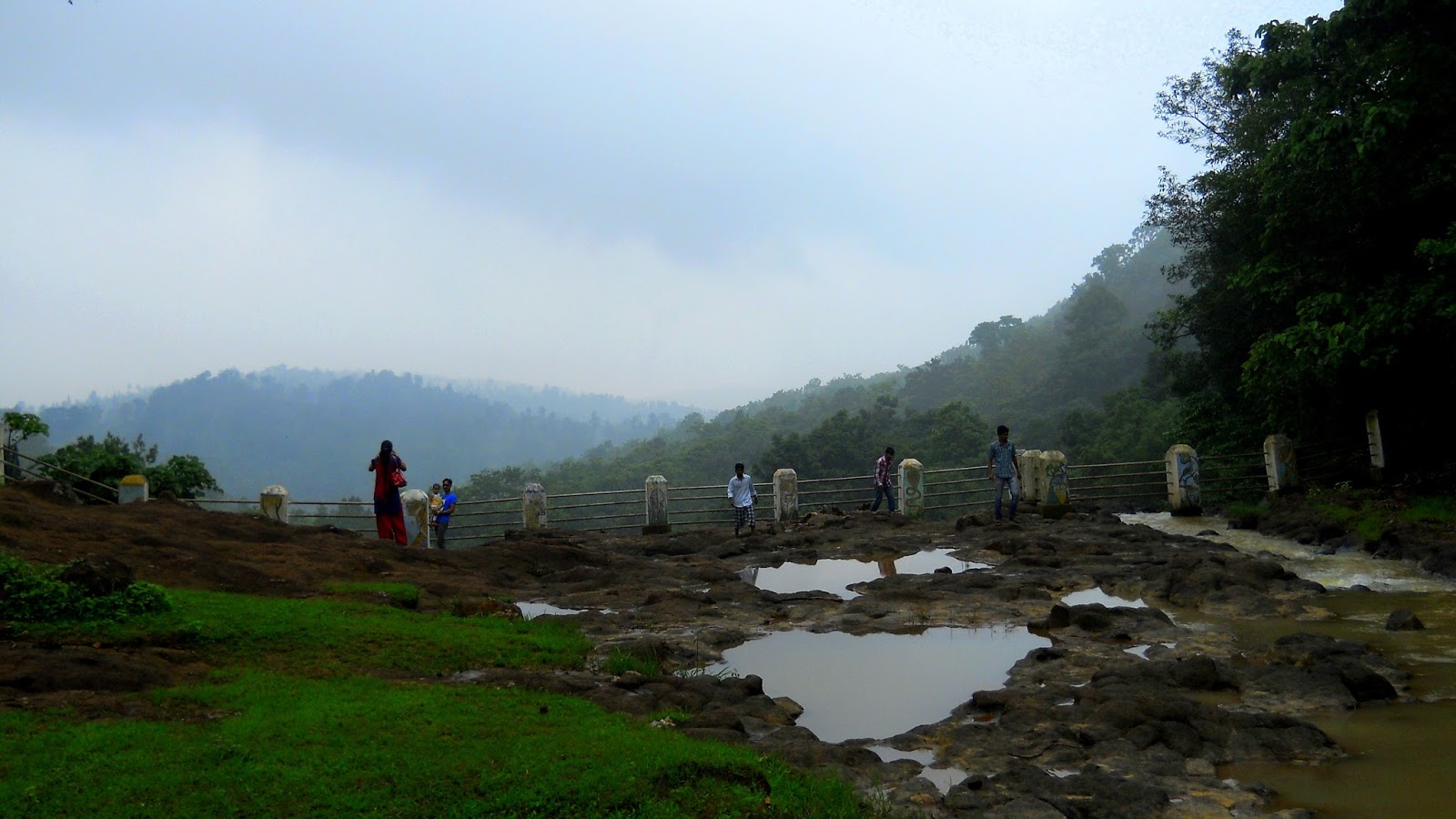 Summary
There are two kinds of small hillstations in India,the normal ones and the underrated ones.Mainpat falls in the latter type.With green slopes,beautiful valleys,gently flowing brooks,unexplored waterfalls,virgin forests and the scope it offers for exploration Mainpat is a gem of a hillstation still hidden from the public.A Tibetan settlement here only adds to the charms of this place and offers an excellent chance to interact with a different culture.It doesn't feel like Chhattisgarh when you are in Mainpat area.Granted this happens only during the rainy and winter season.But it will mesmerize you like it did to me when I visited it with my friends last month.Here is the full account 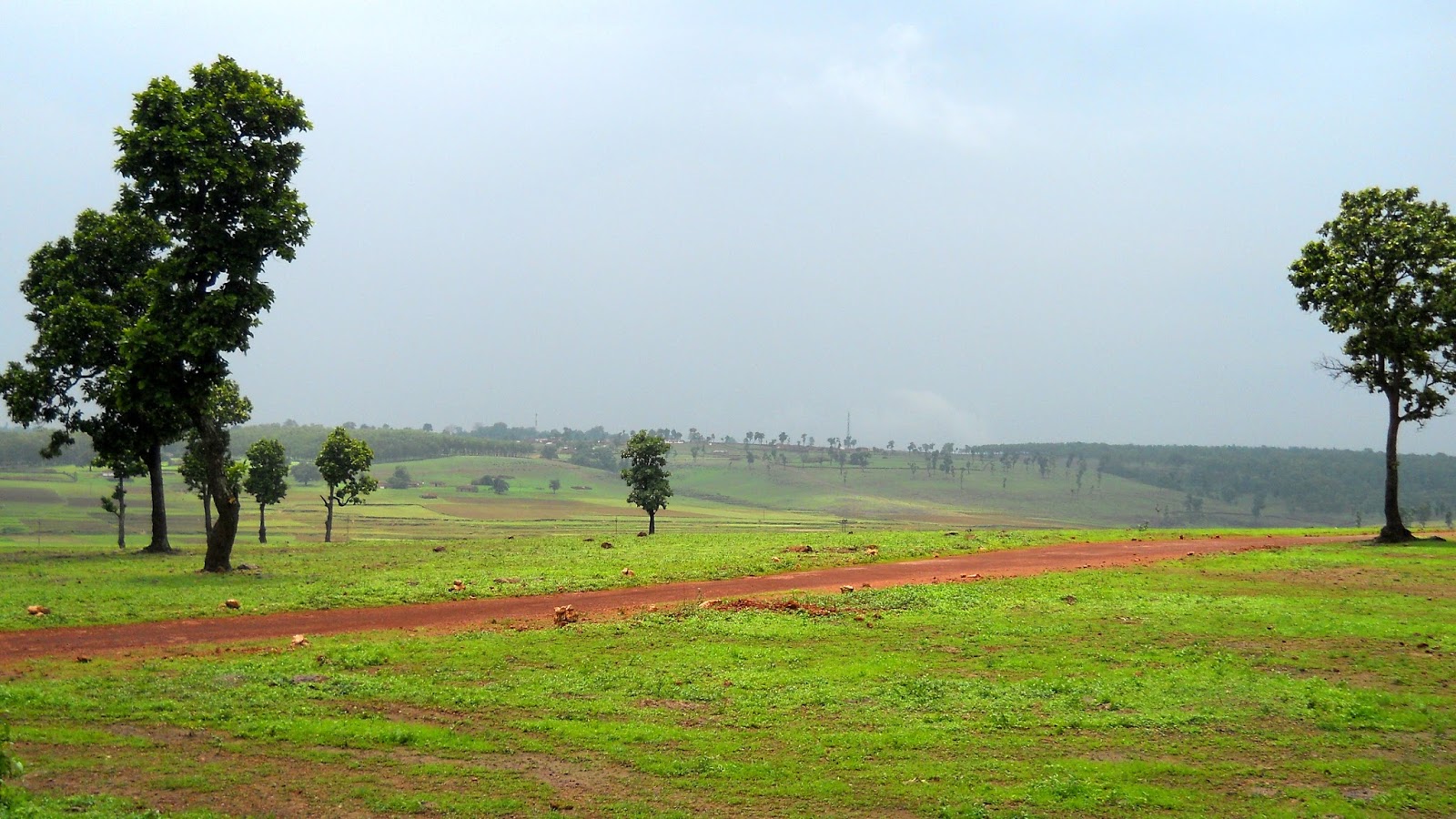 Full account
On Sunday 7 of  2013, we set out for Mainpat in two Scorpios.We were a group of 14.(As an aside look at the diversity we had.Out of 14,seven people were Telugu speaking,three were Bengali,one was Marathi,one was Odiya,one was Malayalam and myself Urdu) We started out at 7am in the morning from Tamnar.(40km from raigarh, in the north)We had our breakfast in the town of Lailunga.It has nothing much to offer but samosas and Badas to eat.we had to ascend a mountain and then descend before we reached lailunga.There are some good views en route.We again made a stop in Pathalgaon which is a big town.I was quite surprised to find a big town like this in these parts.After reaching Sitapur,on the Ambikapur Highway,we made a detour towards Mainpat.
The first point to visit is the tiger point so called because tigers were spotted here long time back.
Tiger Point 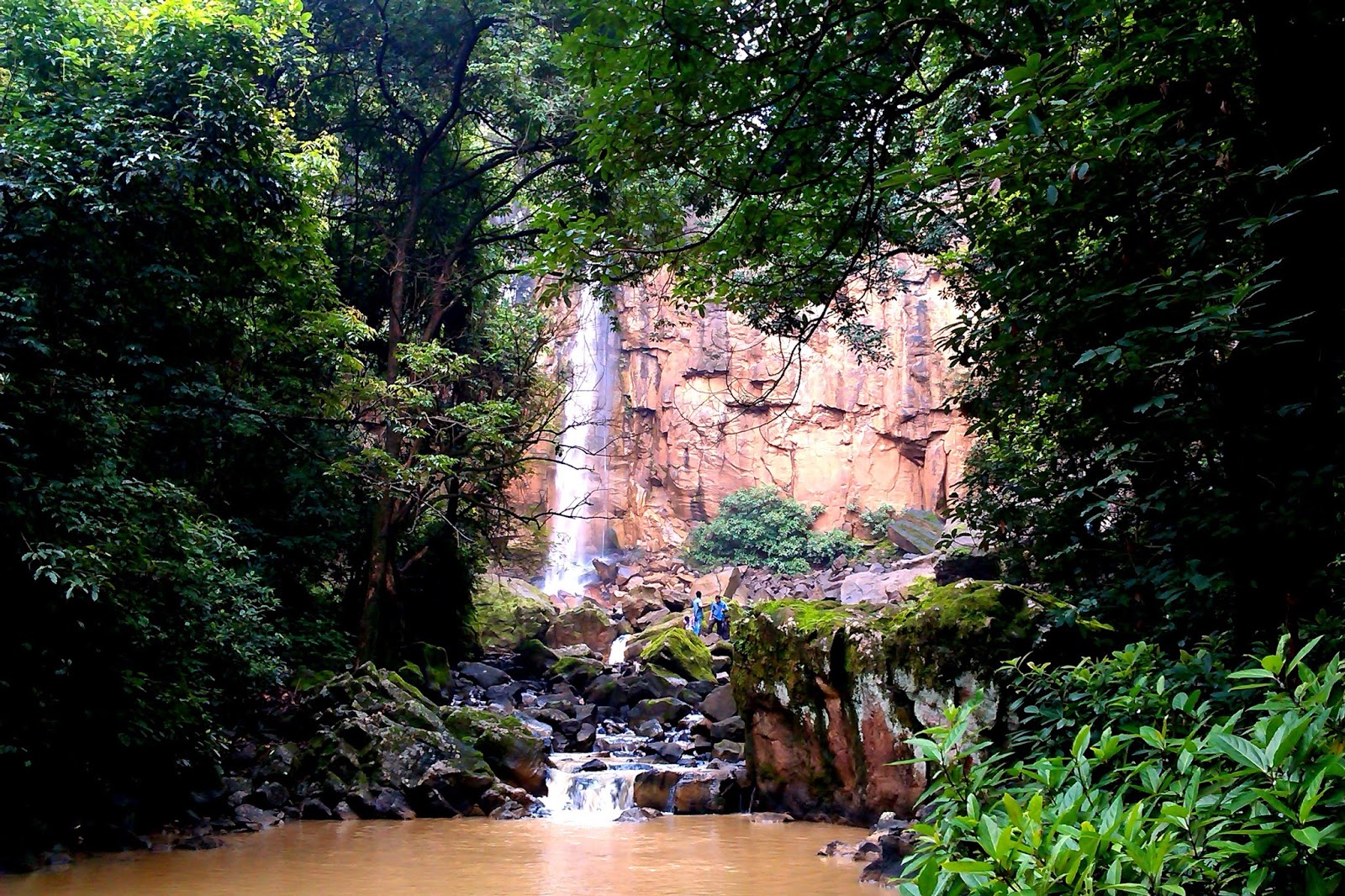 There is a waterfall here which drops from the road level to some 10m down.While driving on the main road some 20km before the town of Kamleswarpur,a road branches off into the jungle.This will lead you to tiger point.This point offers some good views. Theres a small check dam also here.There are steps to take you to the bottom of the fall.Those were very slippery on account of the algae that was formed.Anyway the view of the falls as you descend down the stairs is great!
We got down to the base and sat on the rocks for some time.Ashwin and myself decide to go downstream and reach an area where we could find the darkness of he jungle but the algae on the rocks prevented our progress after some distance.We had quite a few near misses and falls while moving over the rocks.I got a small bruise on my elbow when I slipped and fell.It was nothing compared to what Ashwin experienced though he did not get an injury,he fell head first into a pool of water.He was crossing a part of the stream with the help of a branch of a tree when it broke off and took him head first into the water with his whole body following quickly.Since we all bought an extra pair of clothes it didn't prove to be much of a problem.


From here we moved on to our next point.I was very much interested in visiting the Tibetian settlements around here.Yes,you read it right theres one right here in Chhattisgarh.Back around the time of independence and after when the tibetians were being given refuge in India some of them settled in these 1000 MSL high areas finding it somewhat similar to their homelands.(when compared to the plains) 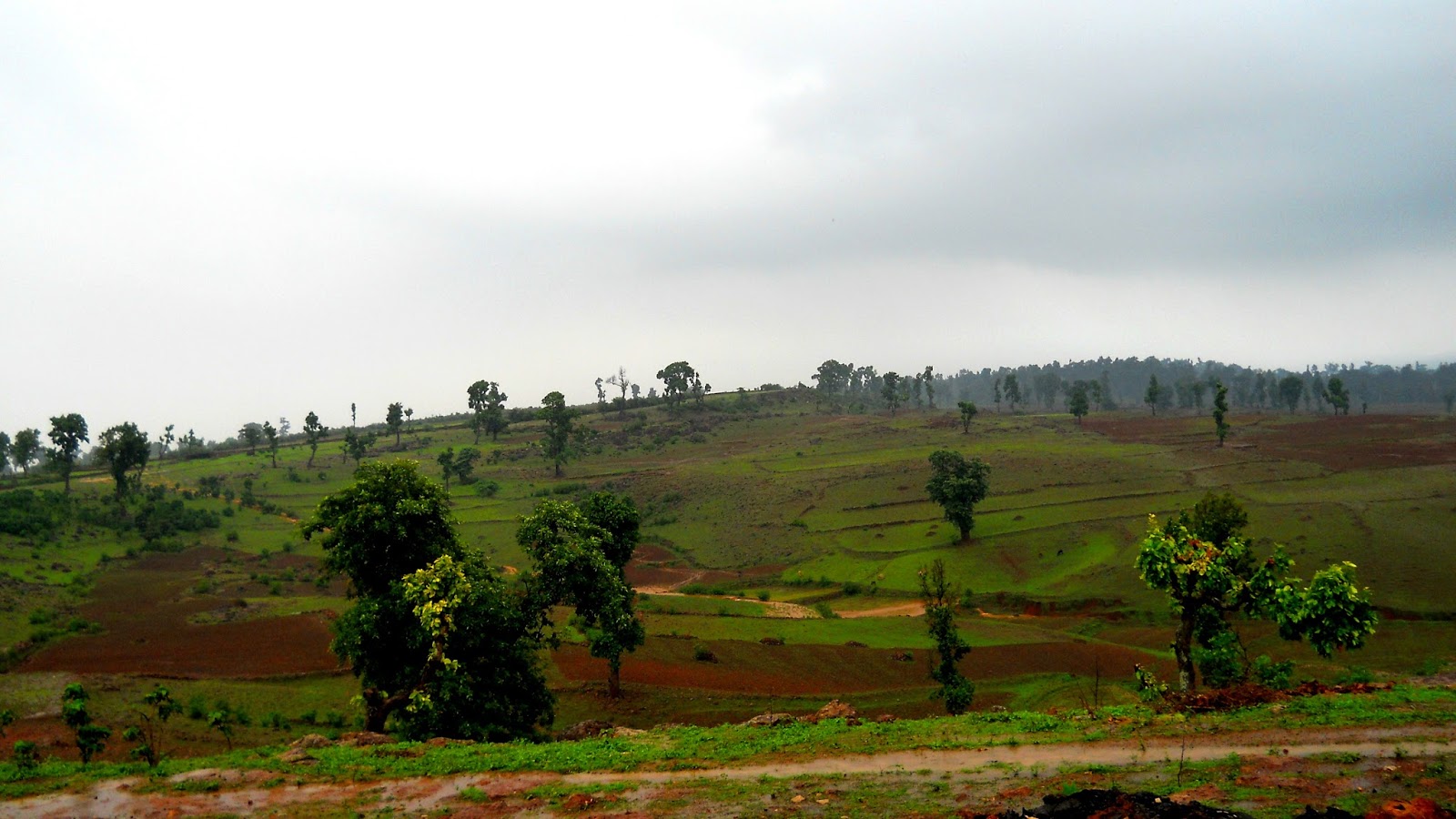 As we were on moving on in our car a slight drizzle started and the surroundings presented view after view of breathtaking landscapes.The green what-looked-like-unending slopes with small brooks flowing and inter spread with bright green bushes here and there made the whole area look right out of an English countryside.Everyone in the car was going 'aaah' 'oooh' ' kya to be hai' and cameras clicked away.We stopped the car many times took pics,took in the views and slowly progressed.We took many wrong turns but all proved fruitful as we only found better views in them.One thing to note here is if you have a doubt regarding which road to take better wait for someone to come and then ask them.Density of people here is less and if you take a wrong turn it will be miles before you find out about your mistake. 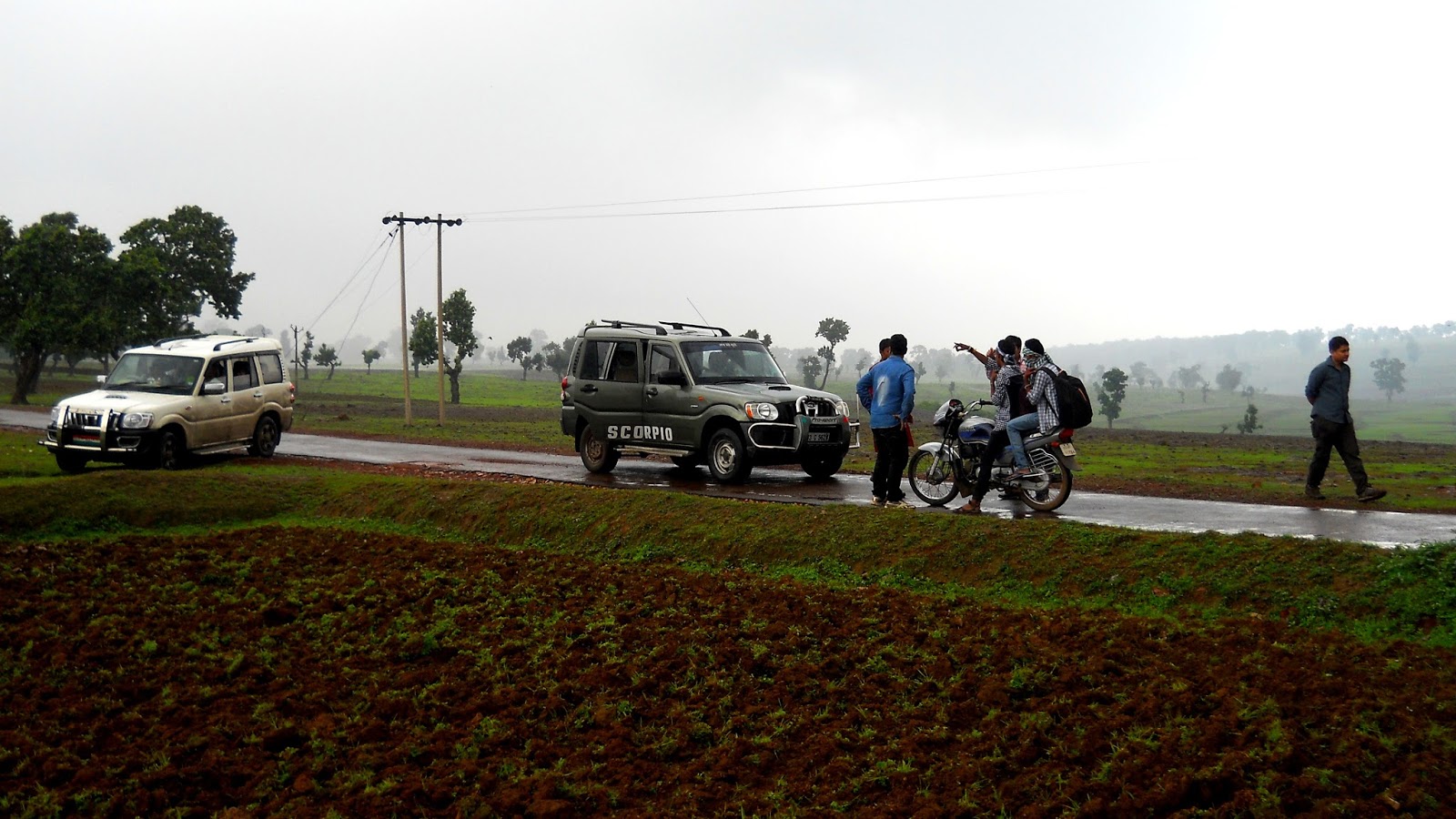 We then passed by a Buddhist inspired restaurant It was closed I think when we approached.On the opposite side a dirt road leads to Camp no.2 of the Tibetan settlement.The settlement is beautiful with small quaint cottages spread around dotted with a few brick buildings.Perfect for a stroll.Some of us took one and walked around the camp.We found a Tibetan restaurant inside.
We called up everyone and decided to have our lunch here itself.We had momos,thokpos and some other dishes whose names I don't remember.All were delicious and when we had our fill we moved out.Some of us stuck up small conversations with some Tibetans and got to know about the history of the place.They found the place peaceful and were living a content life.Most of them were second generation Tibetans. I especially wanted to interact with an old woman who was sitting in the restaurant but she was reluctant to talk so we dropped out queries after the first few tries.
Next on the plan was the Monastery.We asked around for the directions and soon reached it.While going we passed by the only private resort here,The mercury resort.Originally we had planned to visit it but owing to time constraints we dropped the idea.We visited the monastery.It was very beautiful to look at.while we were
wandering around pondering whether it was allowed to go inside or not, a monk in all his robes quietly came out from a nearby building and opened the doors presumably for us.We went in.There were pictures all around the walls.There was a dalai lama statue near the central wall.we looked around and then had a small chat with the monk.He was from Himachal Pradesh and was staying there for the past one year.So he had not much idea about the locals.After this brief chat we bid goodbye to him and set off for the next point,the fish point.

Fish Point
We took many wrong turns before we reached the falls.The route passes by the Chhattisgarh Govt resort.This area is called the fish point because of a particular type of fish found here.As we were reaching here just some distance from it we met a group of travelers returning from it.Their car was stuck in the mud and they were trapped here for the last four hours.Fortunately for them we came at just the right time.It was evening and they were beginning to get scared about the failing light.We got down to help them.Soon we realized that if we continued helping them none of us would the chance to see the falls.
So we made groups and while some helped them some set off towards the falls.I was among the first group of people to go.We could hear a distinct sound of water splashing,so we headed in that direction.We found an opening in the bushes and reached the area where the water falls off the cliff.We were at the top area.We sat here for a while enjoying the view and then set off to find a path that would lead us to the bottom where we could see the whole falls.We searched a lot bit were unable to find a safe way. Thats the beauty of this place it is still unexplored and  you can still experiment with the paths and views here.Just a little ahead the valley takes a turn and the views here are spellbinding.I just stood there imagining how nice it would be set up a table right at that spot,sit around and drink coffee.I made a mental note to return to this place with better equipment and explore the region.The light was failing and we knew the dangers of being left behind in the dark there with no proper mobile network.So we quickly hastened our steps and made our way back to the car.We headed back to the main road but not before we made a wrong turn and that took us to yet another place which offered excellent views of the countryside.Two people returning back from work saved us the trouble by guiding us correctly back to the main road.From there we started off on our return journey.We had our dinner in Pathalgaon in a restaurant near the bus stand.It wasn't good but enough to fill our hungry stomachs.By 10pm we reached our hostel in tamnar and that was the end to our visit to the underestimated Mainpat. 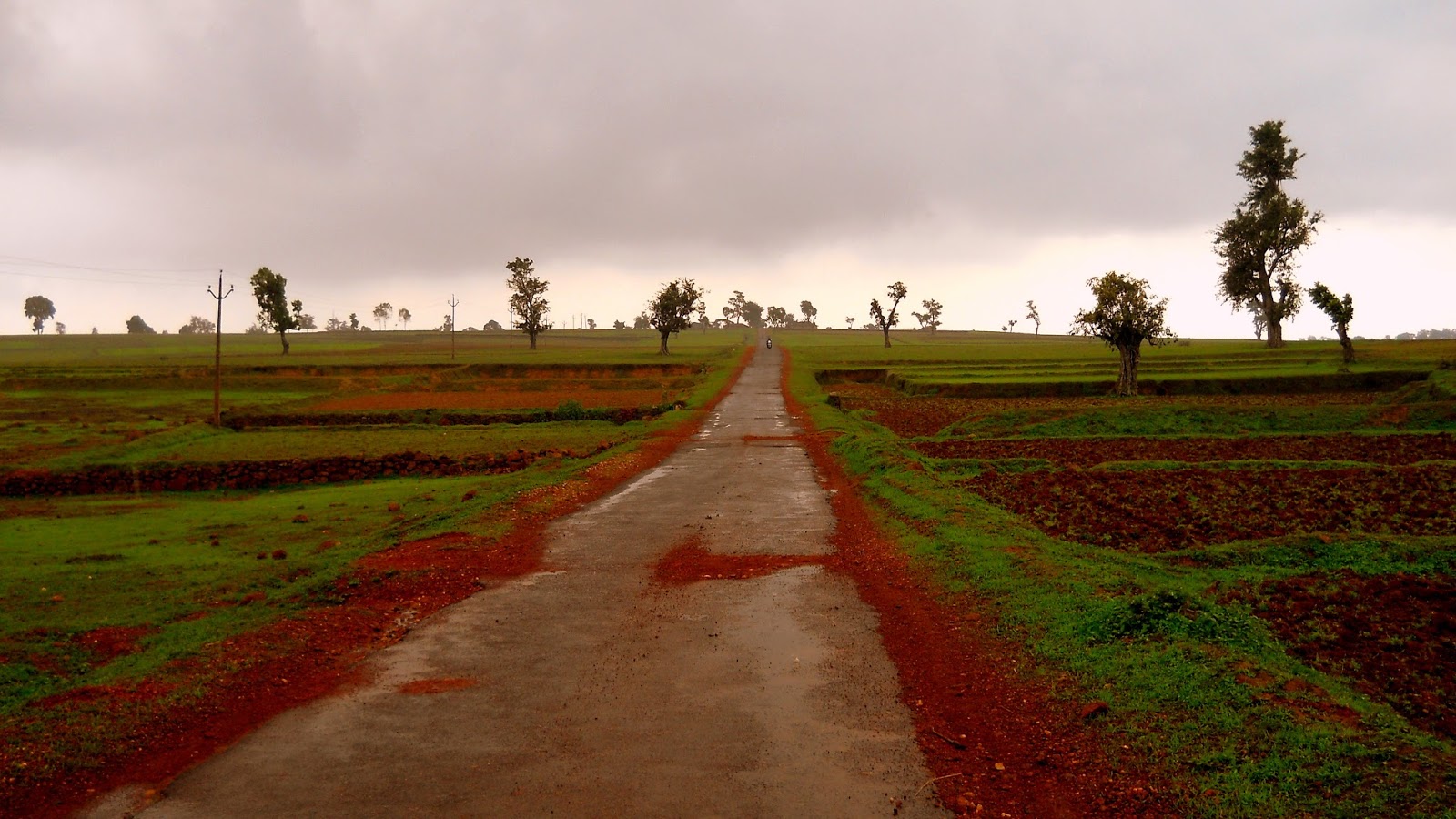 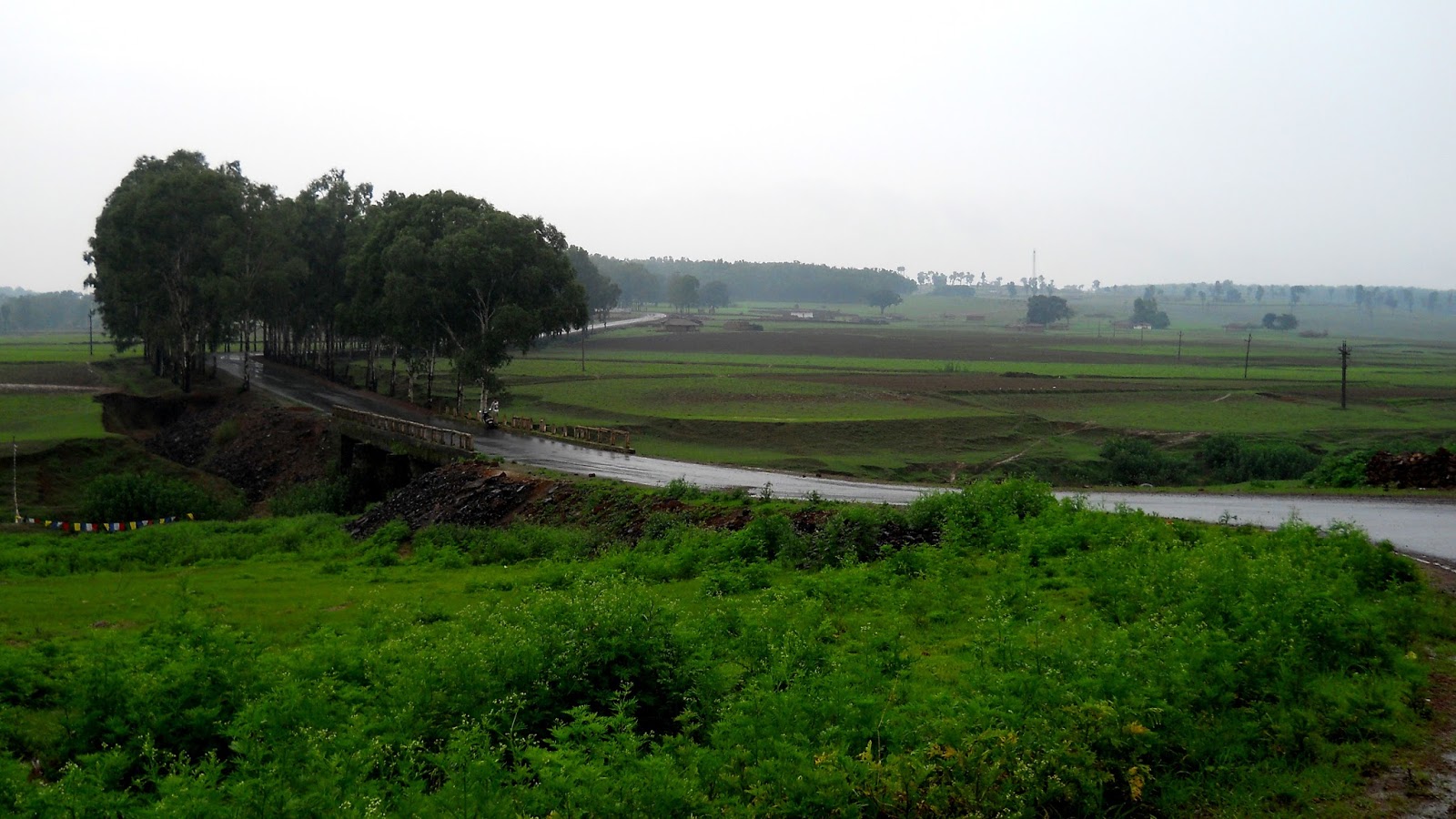 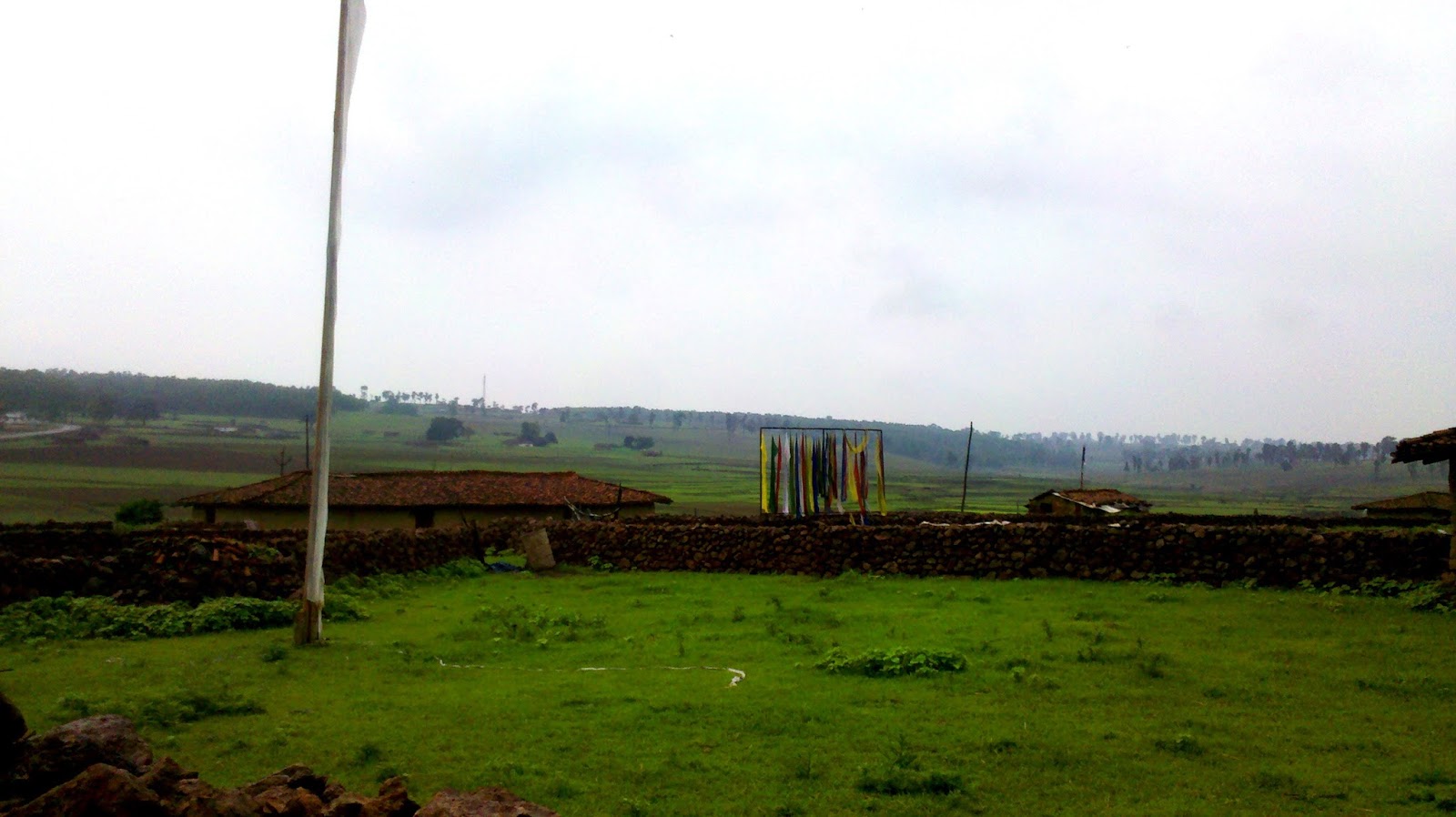 In Brief
Mainpat is 178km from Raigarh and 80km from Ambikapur.
Best time to visit is in the monsoon season and winter season.
Staying options include the privately owned Mercury Resorts and a Govt owned Resort.
A car can be booked from Raigarh.It costs around Rs3000 - Rs4500.People here genrally charge Rs11 per km here.Buses ply between Ambikapur and Raigarh but they are largely unreliable and not comfortable.
Posted by Razzaq Siddiqui at 4:46 AM 3 comments:

Late one night as I was thinking about my impending joining in the company I got placed in,the advice I received from my seniors and cousins started flowing in my mind.They all told the same thing.Enjoy now itself, after starting on a job there won't be much time to enjoy.These words kept on swirling in my mind and at that instance I decided to go on a last trip somewhere nearby before joining.I suggested this to satya and ashwin who readily agreed but abhishek and dido had some work and they declined.
It was 2am in the night when we decided to go to Sambalpur to see the Hirakud Dam.We booked the morning 4 45am bus from Tamnar(our place) to Raigarh and checked out the trains to sambalpur. 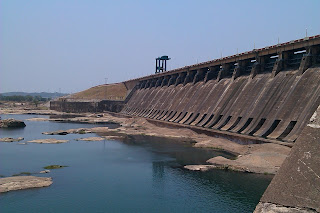 I did not sleep the whole night and at 4 30am we started out.We took the bus to raigarh,had our breakfast there and took the Hirakud express,which to our convenience was running late.We reached sambalpur by 10am.Ouside the railway station,as we were discussing our next move,we met a affable auto driver who readily agreed to take us to the Hirakud dam for a reasonable price.We accepted his offer and engaged his auto.Sambalpur is a sleepy town with some big industries around the dam region.It also has british era buildings which I very badly wanted to see but couldn't.We reached the dam after a good 20 mins of ride.The place looked deserted.It had do with the blazing sun above. Obviously we had come at a wrong time.
As we approach by road we reach one end of the dam.You can have a look towards the catchment area but this side doesn't afford many views.The road on top of the dam is out of limits for tourists.There is
a view point on the right side which has a small hill.Special four wheeled autos take people there.We chose not to go.We looked around for some time in the small building which has a plaque and some other bits of info and then our auto driver told us he would take us another area which was near 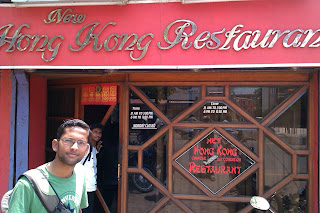 to the dam gates.We went there.Bribing the security guard there you can enter the small gate and have a look at the big gates from the side wall.After getting down to near the water and taking some pics we decided to go back.The place has nothing to offer to the casual visitor.Only if you are interested in dams is this place good to visit.We then went to the 'Hong Kong Restaurant' where we had some good sea food.Again in the afternoon the Hirakud Express was running late and this was again to our convenience and we boarded it to reach Raigarh by evening,We reached back to our rooms by night time.And I was now satisfied
that I could start my job without any regrets at least for the time being. 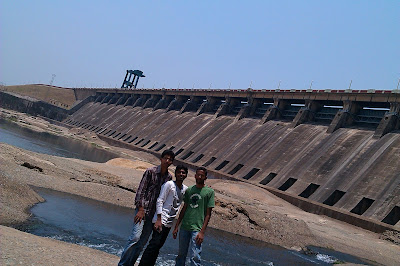 Posted by Razzaq Siddiqui at 8:21 AM No comments: