We got up early the next day and went to the beach which was close to where we were staying.It was 5am in the morning and even at that time there were many people on the beach.It was evident that the sunrise here was famous and worth your time.We spotted the light of a lighthouse in the distance and Ashwin suggested that we go there.We agreed and started walking towards it.On the way we came across anxiously waiting families not wanting to miss the event,sand artists starting there work and mounds of garbage thrown there right on the beach. 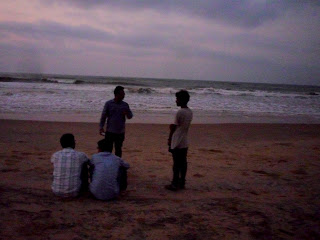 Carefully avoiding all these we soon reached nearby the lighthouse where we were disappointed to realize that it was not on the beach as we anticipated but across the road among some buildings.we decided to remain on the beach though Ashwin later went and saw that it was closed.We made a note to visit it in the evening when it would be open.By the time we reached here it was time for the sunrise.I could see streaks of light slowly illuminating the sky and we waited with our cameras ready but to our dismay there were clouds in the distance and the sun rise was covered by them.After sometime everyone left to visit the Lord Jagannath Temple and I remained back at the beach.I walked around clicking pics and observing the people.I spotted a tea shop  with some chairs around and went there and ordered a tea.The tea tasted bitter but the atmosphere was great.The wind caressing my hair and cheeks,the mild warmth of the sun,and bitter yet refreshing taste of the tea made the moment unforgettable. 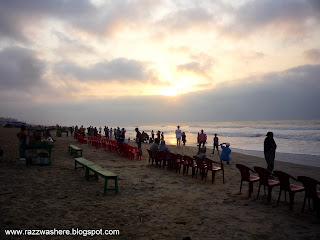 It was 9am when i made my way back to the hotel and by that time abhishek,ravi,ashwin and satya also came back.We had breakfast at a nearby hotel.while we were eating we saw a procession of people holding a string of beads called a harimala in one hand and a small bag containing what I dont know in the other.Most of the people were foreigners.There were kids too in them.The procession was huge and all of them were chanting and this scene reminded me of the fact that Puri is one of India's biggest spiritual centers and is among the seven holiest places in India.After the breakfast we went back to the hotel to take a short nap.At around 11am we got up and changed into our beach wear.Wearing no footwear we walked around the streets.This was the best moment of this trip for me.Nobody gave us a second look as there were many people doing this.Many people were walking towards the beach and on the busy road i could see many cars arriving with more tourists.As it was sunday the crowd on the beach was huge.I spotted a foreign couple taking a surfboard with them.Soon we reached the beach and moved towards a place where there were relatively less people.We ran towards the water and started jumping and screaming as soon as we touched it.We moved in and the waves started beating down upon us and it was exhilarating. This was my third beach visit after Vishakapatnam and Machilipatnam.Even then the fun was no different.Ashwin didn't join us preferring to stay in the hotel than come and get wet in the water.He became the butt of our jokes for the rest of the trip for this decision.
After reluctantly getting out of the waters it was time for lunch.We went to a Bengali Restaurant (Looked as if more than half the population of puri is bengali) called 'Dadi Boudi'.We had some authentic bengali food consisting of different types of fish and prawns.After lunch ravi and abhishek went back to the hotel to get some more sleep while satya,ashwin and myself decided to go to the Lighthouse.We walked there and found that there was still an hour to go before it opens.We spotted a tent and three chairs below it on the beach nearby and made our way there to spend the waiting time. 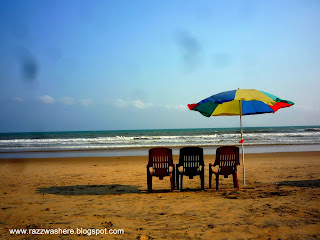 We interrupted the discussion going on between the two guys who were sitting there and asked about the fare.One of them said its Rs30 per chair per hour.We bargained and in the end got Rs10 for each for the hour.We sat down under the shade.We talked among ourselves while looking over at the sea and it felt good.Soon the time was up and we went to the Lighthouse.It opened just as we went and apart from ourselves there was a middle aged man with his daughter with him.We took the tickets and ascended the spiral staircase and reached the top.We had a look at the modern light Emitting Bulb.We took pics at the top and took in the views it had to offer.After that others joined us and we went shopping in the colourful beach market.I bought a bag for my sister and a Konark wheel which i got for a very low price of Rs20.Others all bought somethings and soon we went back to the hotel as we had a 8pm train to catch.We took parcels of food from a nearby hotel and had our dinner on the train.Thus came to an end my first visit to Orissa.
Note- the Lighthouse is open only in the Evening from 4pm to 5pm. 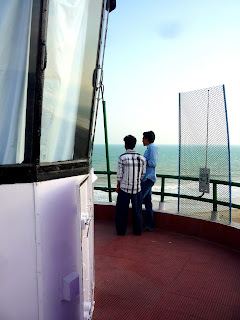 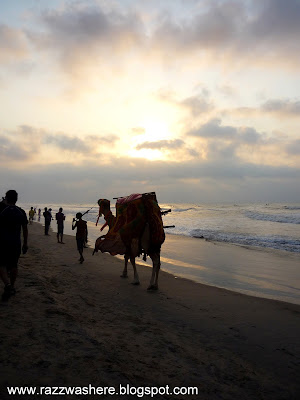 Posted by Razzaq Siddiqui at 4:06 AM No comments: