One of the most underestimated places in the southern region,Bijapur has lots to offer to a
history lover.It has the 2nd largest dome in the world,a fort,a beautiful tomb,one of the
biggest mosques in India and more.
Last month some of my friends and myself visited bijapur.
Our trip started on the night of 24th april.We boarded a Karnataka RTC bus to Gulbarga at 9
30pm and we reached Gulbarga at around 4am the next day.From there we boarded another bus to
Bijapur.In the morning at around 7 30 am, as we were entering the city of Bijapur I could make
out how dirty it was.No wonder tourists avoided it.I have heard that the norther parts of
Karnataka are very underdeveloped and it showed.Near the central bustand garbage was strewn all
around and pigs were roaming around.It was not the kind of welcome I was hoping for.
Anyway,from the bus stand we wandered around looking for a decent hotel which we found after
some search.We had our breakfast and than took an auto rickshaw to Gol Gumbaz.It was Rs7 per
head if I remember correctly.The sight of Gol Gumbaz lifted my spirits immediately.It was
breathtaking to look at.Right from the moment I saw the Gol Gumbaz in my Hisotory Textbook back
in my 5th class I had a desire to see it with my own eyes and here I was standing in front of  it.It felt awesome! 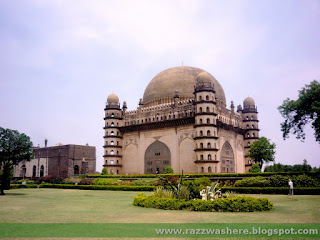 we made our way inside the Gumbaz where we clicked pics and then went to the top where there was the 'Whispering Gallery'. Here below the dome there is a circular platform going the whole circumference of the dome.Here it is said that if a person just whispers at any pint of the circumference it can be heard at any other point on the circumference.But tell you what,theres no chance of testing this as everyone present was,instead of whisering,shouting at the top of their voice.The sounds kept reverberating inside the dome.Wonder what the inhabitant of the tomb must be thinking.Soon we joined in,Ameen and me just kept shouting only one phrase'masterji pitaji ki patloon ek bilang choti kardo!!'and had lots of fun looking at the amused people! 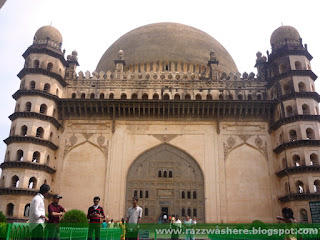 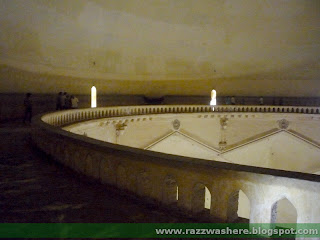 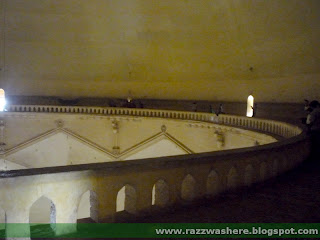 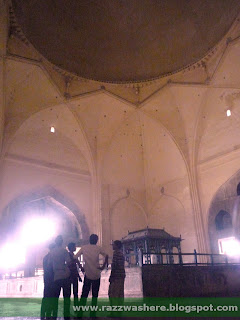 ﻿Outside the Gol gumbaz there were a number of horse driven carriages whose owners or shall I say drivers were offering the tourists present, a ride to seven other tourist spots.We approched one and made a bargain ,Rs250 for a visit to Jama Masjid,Ibrahim Rouza,Jod gumbaz,Chand bowdi,Malik-e-maidan and then back to the bus stand.
And so, we set out on a horse cabby.Our first stop was the Jama Masjid.It was very big and a person inside said that in terms of worshippers capacity it is even bigger than the Jama masjid in New Delhi(which is the Biggest Mosque in India).We sat inside the mosque for some time talking with the middle aged person i mentined above. 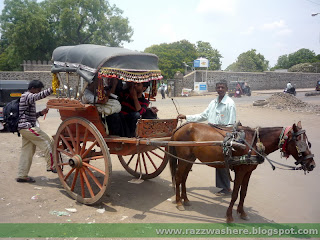 Here I watched an interesting scene.a couple of non muslims entered the mosque and began strolling inside the mosque with their footwear removed.Suddenly the mom realised that her kid was still wearing her sandals.She quickly bent down,removed the toddler's sandals and continued with their walk.I was so touched.She could have easily continued with her walk wihout bothering about the baby's sandals as ,one, there was no one except us and two she was a small child.It was heartwarming to see this and was in such contrast to the stories going around in Hyderabad at that time.(Hyderabad was gripped with mild communal tension at that time) 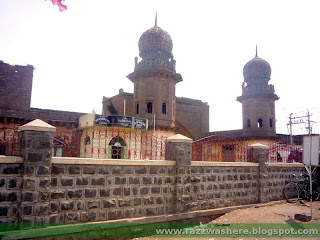 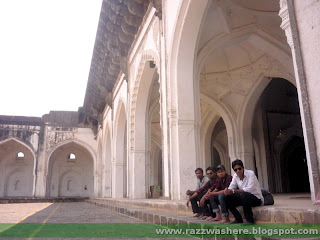 From the Jama masjid we mooved on to Jod Gumbaz which has a couple of tombs.Its a Dargah now.
From Jod Gumbaz we went to the Chand Bowdi which is nothing but a reservoir.Nothing
spectacular here.From here we moved on to the next most important thing to visit in Bijapur,
the Ibrahim Rouza. 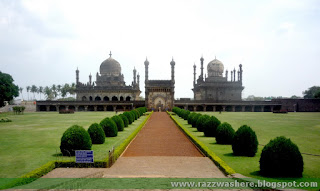 This is the tomb of Ibrahim Adil Shah II (ruled 1580-1627), the fifth king of the dynasty. It
is said that the design for the Ibrahim Rauza served as an inspiration for that of the famous
Taj Mahal.The tomb was very beautiful as well as the mosque on the right side of it.Both are
more or less of the same size.we wandered inside the tomb and gazed at the beautful work on
the walls. 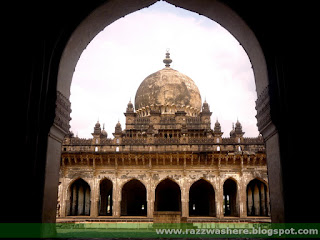 From here we moved on to the next and the last item on our list,the Malik-e-Maidan,meaning
'owner of the battlefield'.This was supposed to be the biggest medieval cannon in the world.The
cannon's mouth is in the shape of a lion's mouth.The cannon is really huge and I read somewhere that the
person who would fire it ,after lighting it,would jump in a tank of water to escape the
thunderous noise it would make. 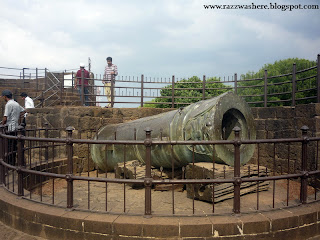 We took some pics here and then went off to the bus stand.Here we had something to eat and
then boarded a bus back to Gulbarga.Here rahmath,ameen,layak,shoaib and mudassir stayed back
while I made my way back to hyderabad feeling content on finally visiting a city which was at
one point in history, a rival of the kingdom of Golconda.
Posted by Razzaq Siddiqui at 6:05 AM